Flipgrid first came to my attention in an online class that used it as a springboard for initiating weekly article and chapter discussions, and I frequently found that some of the class’s most interesting exchanges and insights occurred on the platform. If you’re looking for a way to add variety to your responses and discussions then Flipgrid is definitely worth a look.

Flipgrid is a video discussion tool that can be used for brief responses and summative assessments. Instructors can assign a topic, create a grid and share its access code, and allow students to respond. This app has a few standout features that bear special mention. 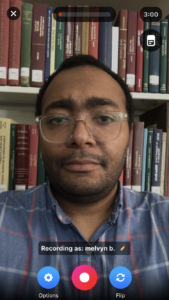 The first is embedded and implicit in its name: grid. Flipgrid is an interesting alternative to the traditional threaded and nested text discussion forum, and instead displays a neat grid of videos. This single-layer visual layout, along with the ability to respond via video instead of a block of text, gives Flipgrid an organic, free-flowing, less-formal feel. Even so, respondents have the option to record and re-record their responses until they’ve captured precisely what they mean to say.

Another of Flipgrid’s strengths is its flexibility. Since it’s available as a web app or for Windows, iOS, or Android, it allows participants to respond and interact whenever or wherever they please, using virtually any device they might have handy, which enables a levels of spontaneity and creativity that might not be achievable with a more limited offering. Video length is similarly flexible, with options for maximum length ranging from 15 seconds to five minutes. This allows each grid to be customized according to its applications, for example a 90 second video for a discussion response, or a 5 minute allowance for a brief presentation. And although most videos will be composed and recorded directly inside the app or browser using a device’s built-in camera and microphone, Flipgrid even allows for externally recorded video to be uploaded via its web interface, giving enterprising users an opportunity to create and submit more elaborate videos if they wish.